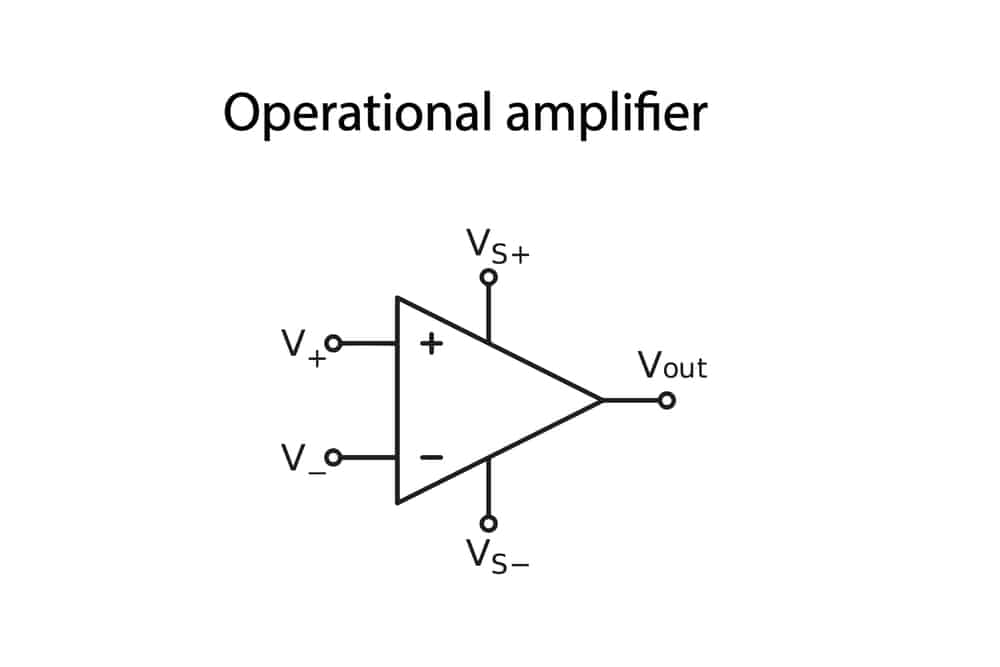 Among common electronic components, the operational amplifier, or op amp, stands out as one of the most often implemented parts and one of the simplest to utilize. Typically, op amps are used as comparators or amplifiers and can be used as voltage sources for other devices or circuits. By far, the most commonly used op amp is the LM741, which is a general-purpose amplifier with two inputs—one non-inverting and the other inverting—and a single output. Notable characteristics are the large input impedance between the inputs and low output impedance.

Uses and Applications for the LM741 Op Amp

The LM741 op amp can be utilized in a wide variety of ways; however, it is most often applied as listed below.

As the list above shows, the device is often used for dual input applications; however, the LM741 can also be implemented as a single input element by tying one of the inputs to ground. Let’s take a look at how the LM741 functions.

Making the Best Use of the LM741 Datasheet

The LM741 op amp can be acquired in several different package types such as CDIP, PDIP, and TO-99. However, all packages have eight pins that should be connected, as shown in the table below (from the LM741 datasheet published by Texas Instruments).

As the table indicates, the op amp has two power supply inputs that are at inverse polarity. The LM741 also includes offset nulls for both the inverting and non-inverting inputs.

The basic operation of the LM741 is as a comparator. This can be seen by taking a look at the component’s functional diagram, shown below. 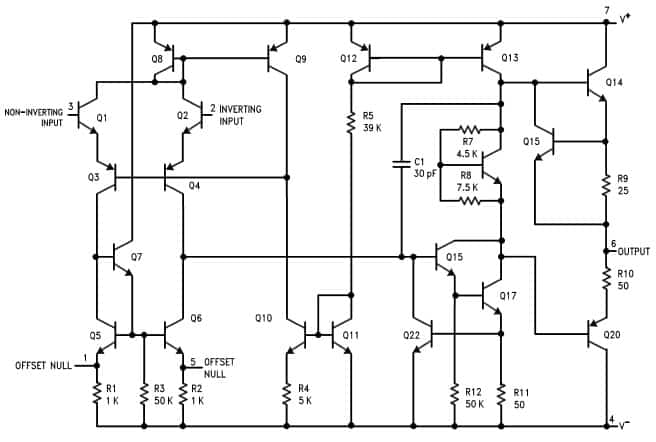 As the diagram (from the LM741 datasheet) illustrates, the op amp is an IC comprised of multiple BJTs, as well as other passive components. The layout clearly exhibits duality signal flows, which enables the comparator functionality. For most applications, the LM741 is also used as an amplifier, where the gain is set by an external resistive network.  In the simplest case, two resistors are used: one is connected from ground to the non-inverting input (pin 3) and the other from pin 3 to the output (pin 6).

In the table below, also from the LM741 datasheet, the electrical parameters and ranges are given. 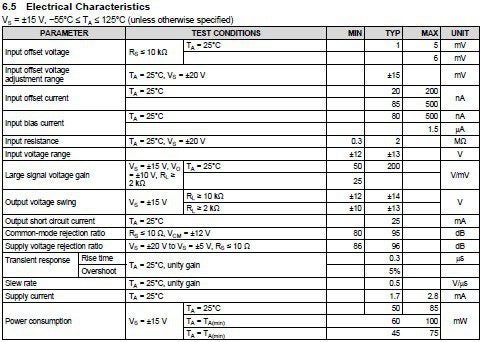 Note, the input resistance is typically 2 MΩ. The output resistance, which for ideal modeling is assumed to be 0, is not listed. An important parameter is the slew rate, which shows how quickly the amplifier can respond to input changes. As listed, this is 0.5 V/µs for the LM741, which allows the component to be used as a filter for some applications.

Alternatives to the LM741

The 741 op amp was originally manufactured by Fairchild as the uA741. Today, many manufacturers—including Texas Instruments, ON Semiconductor, Microchip, and others—make the LM741 (the LM stands for linear monolithic). The uA741 is also still available and is a good substitute for the LM741.

Designing PCBAs With the LM741

The LM741 datasheet is a valuable resource that includes information about the functionality, operation, landing pattern, and packaging for the device. However, to ensure that your component is represented accurately for manufacturing and in an accepted format, it is best to leverage the advantages of a CAD model such as the one shown below.

CAD images for the LM741

The design images above are available from Ultra Librarian (UL), the world’s largest online parts database. In addition to the CAD images for designing your schematic, PCB layout, and ECAD integration, the UL library for the LM741 also includes simulation models for use with PSpice.

For a commonly used op amp like the LM741, it is best to utilize the CAD model as well as information from the LM741 datasheet during the building process. If you’re looking for CAD models for common components, Ultra Librarian helps by compiling all your sourcing and CAD information in one place, and this data is presented in a format preferred by PCBA manufacturers.  Working with Ultra Librarian sets up your team for success to ensure streamlined and error-free design, production, and sourcing. Register today for free.

Where to Find a 2SA1015-Y Datasheet and Replacement Parts